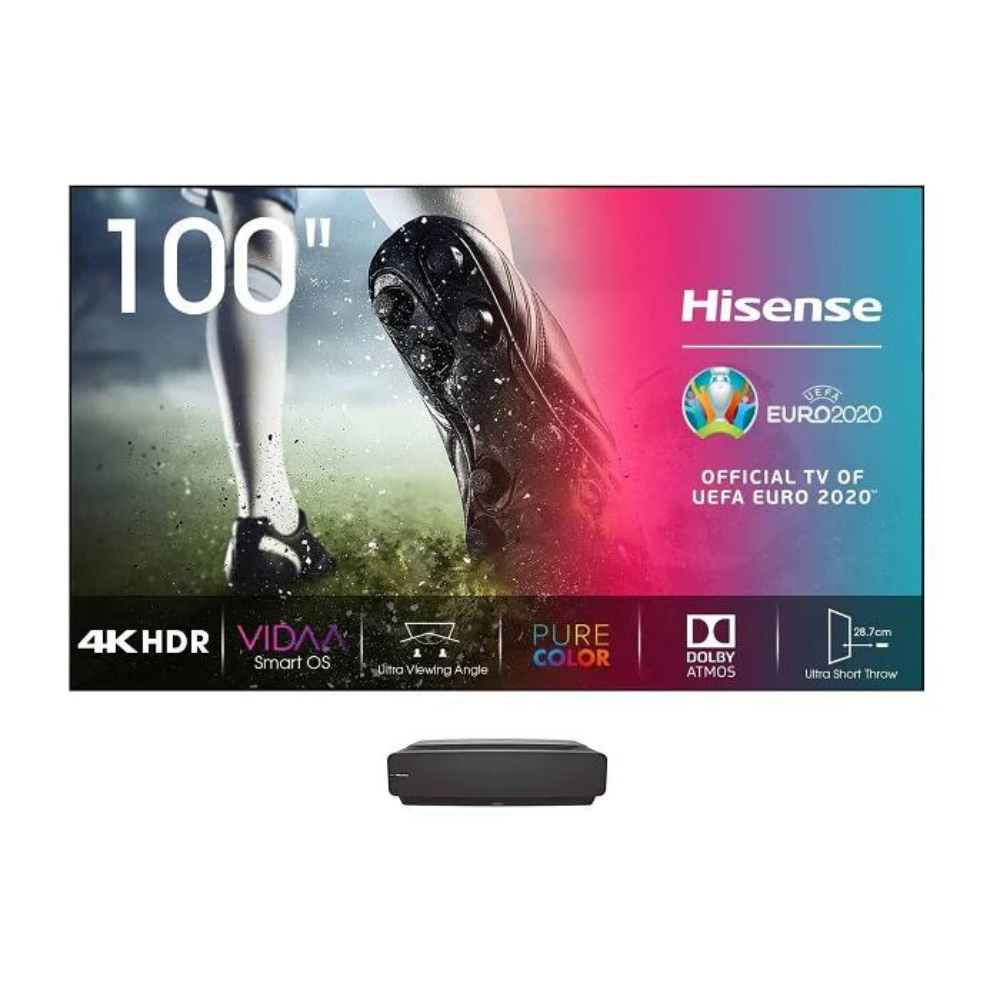 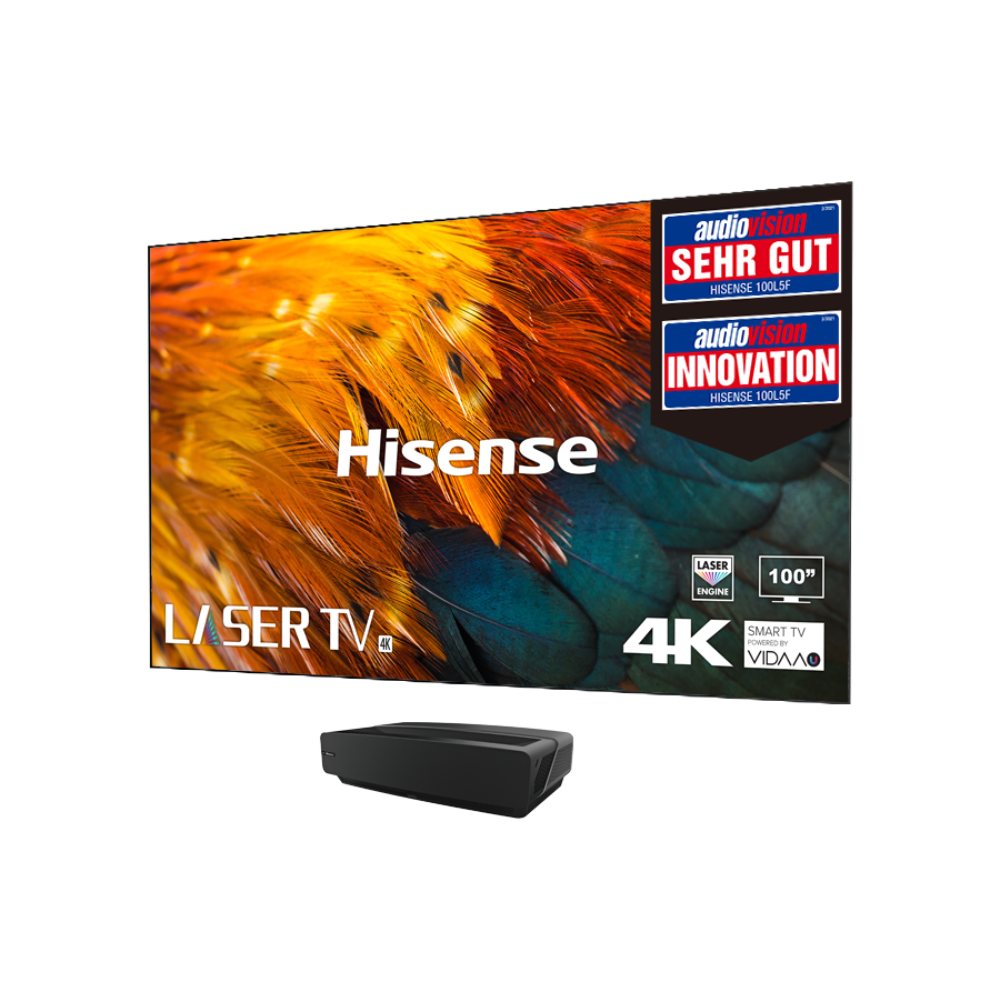 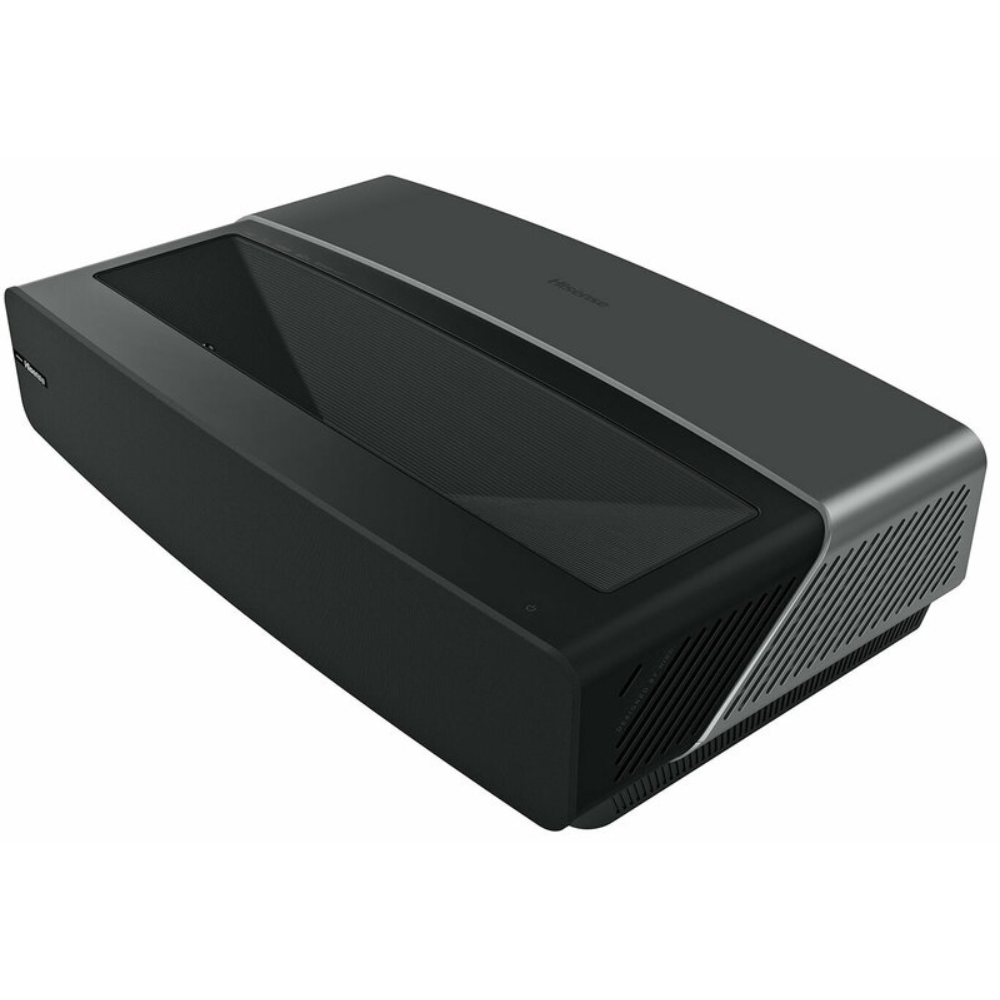 The 100-inch screen is the largest component in terms of area, but the projector is by far the most massive. It’s a 7.3-by-23.7-by-15.8-inch (HWD) short-throw projector dominated by a glossy black panel on the top and a black cloth speaker grille on the front. The grille covers a 50W (25W per channel) Harman Kardon stereo speaker system that, combined with the included subwoofer, gives the TV some very powerful sound. The lens sits in a tapered recess on the top panel, angled up and forward. A metal band runs at an angle around the sides of the projector, creating a silver lip near the bottom front and forming a spoiler-like raised section near the top back.

The Hisense 100L5 isn’t exactly your average TV. This much becomes obvious as soon as you clock the fact that it gives you a massive 100-inch screen for less money than many regular 75-inch TVs.

The main reason it can offer so many inches for your buck is that it’s not strictly speaking a TV. Rather it’s an ultra-short throw projector combined with a rigid 100-inch projection screen that’s designed to reject ambient light, so that you don’t have to black your room out every time you want to watch it.

The projector is a DLP affair illuminated by laser lighting, meaning that it can go brighter and reach a wider range of colors than regular lamp projectors. It also won’t need its laser replacing in the course of its lifetime unlike lamp projectors, and also unlike regular projectors can be switched more or less immediately, without significant warmup or cooldown time.

The Hisense 100 inch Laser TV series is a TV built with beat quality features, it is designed with a seamless unibody which is a one-piece chassis. The body has a very thin grey micro bezel with a central stand that has integrated cable management.

At the backside of the TV, with a comprise of up to four HDMI v2.0 inputs. All the HDMI ports are capable of giving 4K@60fps videos. The other port is a plus AV port for legacy gear and a digital audio optical output. There are also two USB ports and an Ethernet connection for wired networking.

The TV runs the smart option using Hisense’s Vidaa smart platform. It’s relatively lean and means with amazing features and apps that are fast to use.

The Vidaa platform is a fourth-generation version that features a new kind of launcher with a newly improved View bar. The apps display key apps on the display.

Apps like Netflix and YouTube are the first on the interface which is integrated and can launch straight into your profile from the Vidaa homepage.

The TV picture mode comprises Standard, Dynamic, Game, Cinema Night and Cinema Day, and Sport mode. The Sport mode has a unique AI that triggers and activates whenever sports content is detected. The AI plays fast and loose with sport mode, experience deeming during afternoon games shows resulting in some over-saturated looking pictures.

The other area where the Hisense A7500F surpasses its expectation is in its gaming performance. The TV cites better than 20ms input lag which is really great for displaying fast performance games.

Laser TV is now new, big, bold, and beautiful. With Laser technology, every seat in your house is the best seat as the angles of the TV stretch out wide.

The Hisense 4K UHD Smart Laser TV has a wide Color Gamut with features a dual-color laser that displays a cinema-like picture. The display has unique vibrant colors with a true-to-life image, shown on ambient light rejection screens for an immersive home theater experience. In addition, with Harman Kardon sound infused on the laser projector.

Combines DLP Theater Technology and Hisense patented technology to provide laser-focused detail and brightness, once only seen in a cinema, now available for any room in your home.

Hello, would you like any help? Our online store is open and we're still delivering safely to our customers. WhatsApp an Agent
Start a Conversation
Hi! Click one of our member below to chat on WhatsApp ;)
Our team typically replies in a few seconds.
24/7 Support
Customer Support